A Picture of Otto Summary & Analysis
by Ted Hughes

A Picture of Otto Summary & Analysis
by Ted Hughes 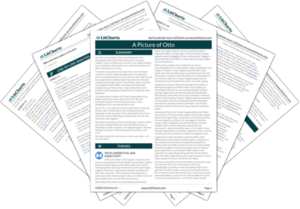 The British poet Ted Hughes published "A Picture of Otto" in his final collection, Birthday Letters, in 1998. This collection is heavily autobiographical, and focuses on the relationship between Hughes and his former wife, the famous American poet Sylvia Plath (who died by suicide in 1963). In this particular poem, Hughes addresses Plath's father, Otto, whom Plath depicted as an overbearing tyrant (and also conflated with Hughes) in her poem "Daddy." Hughes meets Otto in the underworld, and, rather than confront him in anger, expresses sympathy for and solidarity with him. Hughes suggests that Plath's perception of both men was just that: her perception, rather than the objective truth of who they were. In this way, the poem seeks to complicate the mythology surrounding Hughes and Plath's relationship, while also suggesting more generally that there are many sides to any story. 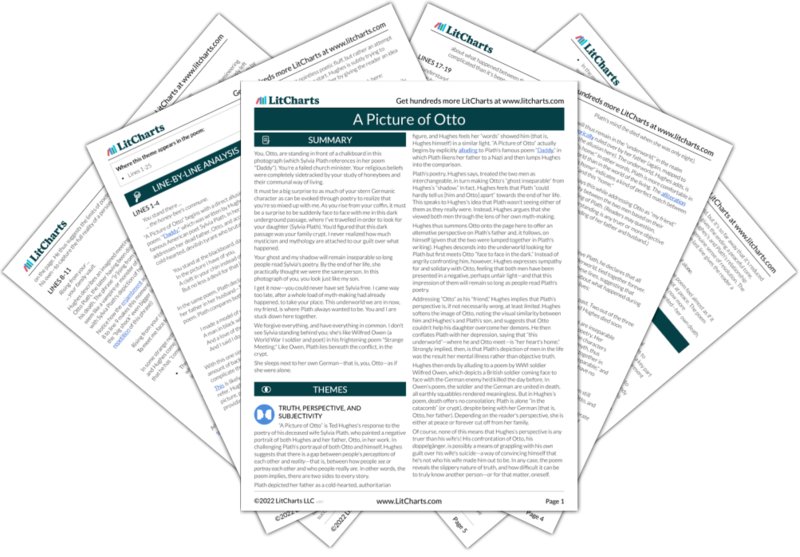 Get the entire guide to “A Picture of Otto” as a printable PDF.
Download

The Full Text of “A Picture of Otto”

The Full Text of “A Picture of Otto”

1You stand there at the blackboard: Lutheran

3Of Heaven and Earth and Hell radically

4Modified by the honey-bee's commune.

5A big shock for so much of your Prussian backbone

6As can be conjured into poetry

7To find yourself so tangled with me —

8Rising from your coffin, a big shock

9To meet me face to face in the dark adit

10Where I have come looking for your daughter.

11You had assumed this tunnel your family vault.

12I never dreamed, how occult our guilt,

13Your ghost inseparable from my shadow

14As long as your daughter's words can stir a candle.

15She could hardly tell us apart in the end.

16Your portrait, here, could be my son's portrait.

17I understand - you never could have released her.

18I was a whole myth too late to replace you.

19This underworld, my friend, is her heart's home.

20Inseparable, here we must remain,

21Everything forgiven and in common —

22Not that I see her behind you, where I face you,

24Under the battle, in the catacomb,

25Sleeping with his German as if alone.

It gathers to a greatness, like the ooze of oil Crushed

Everything you need
for every book you read.

"Sooo much more helpful than SparkNotes. The way the content is organized
and presented is seamlessly smooth, innovative, and comprehensive."
Get LitCharts A+
Get LitCharts A+

Everything you need for every book you read.

Everything you need for every book you read.